You are here: Home / About / Biography

Todd Van Beck has been featured by the International Cemetery and Funeral Association in a multipart article. The article has been reprinted with permission.

Todd W. Van Beck is one of the best known and most well regarded educators, writers and speakers in the funeral profession. His book, “Winning Ways,” and the articles he frequently contributes to trade magazines illustrate Van Beck’s seemingly limitless ability to come up with simple yet innovative ways to improve a funeral home and his knack for explaining good business practices in a down-to-earth, step-by-step way. 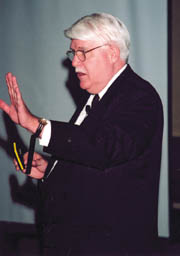 Want to feel good about the funeral profession? Go to a seminar where Todd Van Beck is speaking. You’ll laugh, you’ll cry and most important, you’ll learn. His style is humorous and self-deprecating, his language often “colorful,” but what always shines through is his passion for and belief in the importance of funeral service.

During a recent trip to speak at a state funeral directors’ convention, Van Beck spent several hours talking to ICFM about his life and career and giving his opinions on a wide variety of topics, including today’s “Entertainment Tonight” funerals, industry critics, the key to success in the funeral business, the funeral vs. the cemetery side of the business, the increase in the number of women in funeral service and personalization.

But before the commentary comes the background — how Van Beck got into funeral service, the jobs he’s had and what he’s learned from them. These are the stories he tells on himself, the ones that make him seem approachable to even the most neophyte funeral director attending his or her first educational seminar.

Unlike many in the funeral and cemetery business, Van Beck was not born into it — at least not in the sense of having had parents who were funeral directors. But perhaps the most telling words uttered by a man of many, many words, the ones that should comprise the title of his autobiography, should he decide to write one, are these: “I came out of the womb an undertaker.”

Continue on to Next section
or Use the following links to continue reading this article:

The page links to the article pages have been modified to use this site’s navigation and Mr. VanBeck’s outdated contact information has been removed. The article text is copyrighted by ICFA, 2003.

Typical responses received from attendees of one of Todd W. Van Beck's seminars... "Best speaker in funeral service. Third time I have seen Todd, he only gets better." "Great speaker!! Everyone should have the … END_OF_DOCUMENT_TOKEN_TO_BE_REPLACED