You are here: Home / Blog / The History, Value And Benefit Of Funeral Flowers

Most of us in the funeral profession have been there—the headache of funeral flowers. Not to be negative, but I used to get very frustrated with the responsibility of handling funeral flowers. The routine always seemed the same. I would have on a new suit and when transporting flowers, I always damaged my suit either with water, that green mushy stuff they position the flowers in, the flower pollen stains or from my own blood when my fingers got stuck by the sharp wire mesh to which they hook the flowers.

There were flower pedals everywhere on funerals. It seemed to me as if the great big mums had a secret explosive device in them—planted by angry, vengeful florists—that would detonate simply by a funeral director looking at them. Wham, boom – 10,000 mum pedals on the floor and two minutes before the service was to begin to boot!

Of course, this attitude was one of immaturity and limited vision on my part, for I was unaware and ignorant of the importance of funeral flowers. I was ignorant of the history, development and benefit of flowers. This article was written to help correct my deficiencies concerning this subject. The hope is that this information will help other funeral professionals.

The oldest tribute, the oldest form of memorialization, the oldest act of mourning is the arrangement and placement of flowers around the dead. This ancient activity was well documented by Dr. Ralph Solecki in his famous excavation in the Shandiar Cave in Northern Iraq.

In 1951 Dr. Solecki discovered several burial sites in the Shandiar Cave. Even­tually his discovery would gain entrance into the Guiness Book of World Records as the oldest form of religious activity in human burial. In any event, during Solecki’s archeological dig, he submitted soil samples from each grave to Mme. Arlette Leroi-Gourhan, a paleobotanist from Paris, France, for pollen analysis. Under her microscope, she found pollen and flower fragments from at least 8 species of flowers. These flowers represented mainly small, brightly-colored wildflowers. She recognized relatives of the grape hyacinth, bachelor’s-button, hollyhock and a yellow-flowering groundsel. Mme. Leroi-Gourhan declared that the burials took place 62,000 B.C. and that is was no accident of nature that the pollen was deposited so deep in the cave. Neither birds nor animals could have carried flowers in such a manner in the first place and, in the second place, they could not possibly have deposited them directly on a burial site. Therefore, she concluded that someone 62,000 years ago had roamed the mountainside in the mournful task of collecting flowers for a funeral tribute.

III. IN A FLOWER GARDEN

Throughout the ages, humankind has equated death with sleep and this repose, or sleep, was usually in a garden full of flowers. “May God receive all our souls among his holy flowers,” Turpin (“Song of Roland”) asks God over the bodies of his barons. Similarly the ancient figure of Roland prays that “He will let them lie in holy flowers.” This ancient verse contains both aspects of the condition that followed death, namely lying down or the sleep without sensation, and holy flowers or the garden in bloom. The garden of flowers equated into visions of paradise in olden times, the images of “cool meadows” of Virgil’s “Elysium, “watered by steams” or from the garden that the Koran promised to believers.

If paradise was full of flowers and meadows, in ancient thought Hell was the opposite. In Homer’s Hades there was neither garden nor flowers. Hades—at least the Hades of “Book XI” of the Odyssey—also makes quite clear the absence of floral or any pastoral comforts.

The Prayer Book of Serapion, the Greco-Egyptian liturgical text from the middle of the 4th century, contains this prayer for the dead, “May his spirit rest in a green and tranquil place.”

Thus the words designating paradise are all related to one central concept: the cool garden with an abundance of flowers. As we will see shortly, the funeral pro­fession of the early and mid-20th century identified closely with this floral imagery.

Nowhere in the influential thinking of Western Civilization was the ideal of linking paradise with the garden more prevalent than in the burial of Jesus Christ. Jesus was entombed in a garden, pure and simple. Our cemeteries today often resemble a garden concept like the one where Jesus was entombed. Today people value the floral concept of the pastoral scenes of death in contrast to the mass burials that were witnessed in Nazi Germany. The power of the idea of death being linked to flowers is still easily identifiable.

Flowers also have a particular aesthetic value in the face of death, for the beauty of the flower helps balance our emotional response to the sharp contrast of the perceived ugliness of death. Flowers help soften the raw data imagery that death leaves with survivors.

The fragility of life is also symbolized by a flower. Flowers, to be healthy, require the proper condition to grow and expand – just like human beings.

And finally, the color of flowers has a specific symbolism, particularly in religious thought.

Flowers, as we have just discussed, help the person think in symbolic terms, which is the way that much of the information concerning death is communicated.

V. PRACTICAL USE OF FLOWERS

From time immemorial, flowers were used to control the offensiveness and ob­noxiousness of body decomposition. No doubt this was part of the reason that flowers were used in the Shandiar Cave burials so many centuries ago.

One of the most famous funerals where flowers were used to mask the odor of decomposition occurred in 1874 when President Andrew Johnson was buried. His body was not embalmed, and by the day of the funeral, his body was in such a foul condition that undertaker Lazarus C. Shepard closed the casket and heaped loads of fragrant flowers on top and around the burial receptacle. The fragrance of the flowers hid the odor long enough for the funeral to take place.

VI. “IN THE GARDEN” MOVEMENT

In 1914 C. Austin Miles wrote the famous funeral hymn “In the Garden.”

“I come to the garden alone,

While the dew is still on the roses.”

And He tells me I am His own…”

The hymn stormed the country and became one of the most frequently sung hymns at funerals in the United States. The hymn also began a movement in funeral service whereby the mortuary practices of the country would revolve around the body reposing in the garden.

In face, the movement in Protestant funeral practices in the United States to use the “In the Garden” theme was so strong that funeral homes began to develop facilities that used an indoor garden as the backdrop where the body would repose.

The chapels were actually solariums with waterfalls, plants and flowers, and even live birds flying around inside. And, seen in these funeral home ads of the 40’s and 50’s, the establishments actually utilized the “In the Garden” name. 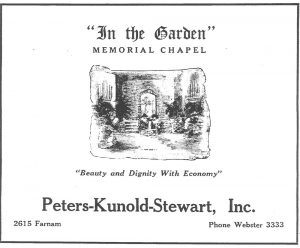 The importance of flowers in funeral services was probably best exemplified by the creation of Midwestern funeral practices of the role of the flower lady. The flower lady was analogous to the pall bearer role, but instead of carrying the casket, this group of women (usually six) would carry the flowers from the place of the funeral to the flower vehicle, and then would assist in setting them up at the cemetery.

Flower ladies were chosen with as great care as the pall bearers were, for they were usually close friends of the family and it was viewed as a distinct honor to be chosen.

VIII. THE CONTEMPORARY VALUE AND BENEFIT OF FLOWERS

In order for funeral professionals to be able to better educate families about the benefit of funeral flowers, the following seven suggestions are made:

There are many implications in such a request. The obituary is actually an announcement of the death and an invitation to attend the funeral. It is not considered good taste to openly anticipate a gift and accompany an invitation with a dictatorial statement that only certain kinds of remembrances are acceptable.

Many people resent being told how to express their sympathy. They like to decide for themselves whether to send flowers, make a donation, send a card or extend a helping hand. There is a place for both flowers and charity in our modern day world and it is important that we place each in its proper perspective.

The funeral meets the bereaved’s need for support. Death throws people into de­spair and depression by separating them from one who has provided love, com­panionship and security. The funeral and our funeral customs provide the means by which those close to him can give their support and share his suffering.

The funeral period provides for the expression of sorrow. Only through talking out the past can the bereaved person realize the extent of the relationship with the deceased, and accept the loss and suffering. Only through weeping and talking to good listeners can they release their grief and their feelings of guilt and hostility. Experts in grief therapy believe that grief can be expressed best through rites, rituals and ceremonies. The ceremony deals primarily with intellectual concepts and does not fully engage the bereaved’s feelings in the patters of community support that are psychologically beneficial. Flowers, though, express the inex­pressible—they are symbolic.

People have traditionally expressed their respect for the dead and sympathy for the bereaved by sending flowers. This custom is one of longstanding and it has served people as a means through which they can express their feelings.

There are three points to be stressed in connection with the tradition of funeral flowers:

This site uses Akismet to reduce spam. Learn how your comment data is processed.

Typical responses received from attendees of one of Todd W. Van Beck's seminars... "Best speaker in funeral service. Third time I have seen Todd, he only gets better." "Great speaker!! Everyone should have the … END_OF_DOCUMENT_TOKEN_TO_BE_REPLACED